July 15, 2010 – Expert Kiteboarder, Kinsley, was enjoying one of his favorite sports when a wind gust hit his kite and carried him out of the water and onto some nearby rocks. There were many other kiteboarders and spectators around who were able to call 911 and get him airlifted to a nearby hospital quickly.  Kinsley suffered head and neck injuries, the most serious of which was to his 5th and 6th vertebrate.  They initially relocated him to Sierra Vista Hospital where a team of highly regarded Neurosurgeons took over his care.  He had surgery on his neck, placing support rods in to strengthen his 3rd–7th vertebrate which allowed him to begin rehabilitation within days of his operation.  These rods will remain in his neck -- his own bones will eventually cover over them.  The good news is the mobility of his neck (side to side & up and down) will be extremely close to what it was prior to the accident.  That said, both the spine swelling and surgery swelling has severly impaired Kinsley's mobility below the neck. More specific information on Kinsley's health is detailed in the Condition Log section of this website, which highlights new progress such as: "Kinsley has started to gain use of his left tricep, bicep, shoulder, pec’s and lats."

Kinsley is experiencing common problems associated with severe neck injuries. MRIs and CAT scans showed that his spinal cord was not damaged. His spinal column is just very narrow and thus swelling has a greater effect on him. He was moved to a top Rehab Facility at Santa Clara Valley Medical Center that specializes in spine injuries for about a month. Jamie and her brother Kyle also headed north to stay in the hospital family housing during that time. As of 9/22/10, Kinsley & Jamie returned home to beautiful central coast to complete his Rehab.  As most of you know, Kinsley and Jamie brought their first son (Taizen) into this world on Aug 26th at 4:45am - He iis 6 pounds, 12 ounces, 18 inches long. Jamie and baby are doing well, while Kinsley is overwhelmed with happiness over his new kid!  Baby Taizen gift registry is being hosted by:  http://www.thebump.com/registry/home.aspx

Kinsley has been at the forefront of Central California Kiteboarding & Paragliding 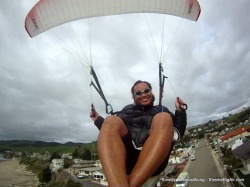 Kinsley ThomasWong started Xtreme Big Air, an extreme sports company offering instruction and sales in paragliding in 1994. An USHGA Advanced Tandem Paragliding Instructor, he was one of the early kiteboarders in the United States and in 1999, became the first IKO (International Kiteboarding Organization) Certified Kiteboarding School in the nation with an Advanced Kiteboarding Instructor rating. Before Stand Up Paddle  (SUP) Boarding took off, he also quickly became an expert in this sport and added this element to his business in 2009. On windless days, Kinsley loves to teach people to SUP surf and share his SUP fishing techniques at his secret 'honey hole.’

His early activism and community involvement in both paragliding and kiteboarding has been instrumental in advancing these sports.  A sponsored kiteboard rider for many leading brands, Kinsley has also been featured in numerous local and action sports publications worldwide. He has been referred to as the ‘father’ of kiteboarding in Central California, being one of the first (of two) to start the sport in 1998.

While instruction has been suspended as Kinsley works through rehab, the XtremeBigAir store continues to run seamlessly, offering paragliding, kiteboarding and SUP sales and service during his recovery process. www.xtremebigair.com

Kinsley and his lovely wife, Jamie 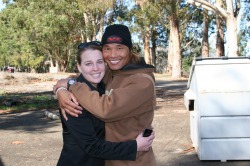 Kinsley met his wife, Jamie, in January 2005 when Jamie wanted to learn to fly like a bird with a paraglider wing.  A few months later, Jamie also picked up Kiteboarding.  Soon, off they went to Brazil in October 2005 to celebrate Jamie's Birthday and enjoy their first overseas trip together. They have shared so many experiences by travelling the world kiting & paragliding.  Jamie and Kinsley first child (Taizen) arrived Aug 26th at 4:45am and is 6 pounds, 12 ounces, 18 inches long.
Kinsley ThomasWong Website Accident Kiteboarding Medical Condition Updates Donation Outreach Xtremebigair